So how does invisible fence work? Good fences make good neighbors. A dog owner who keeps his dog in his own yard is a good neighbor for people who are afraid of dogs, don’t like having their lawns covered in feces, and don’t like muddy paw prints on their patio. If you’ve heard of invisible fencing, you might know what they are.

In this article we will find out how an invisible fence works and also the pros and cons of using this type of fence.

Pet owners can now keep their dogs inside the boundaries of their lawns without having to build a tall wooden fence. It’s not magic.
An invisible fence works by emitting a radio signal from a transmitter installed in your home. The signal creates an invisible boundary around your yard that the pet cannot cross. If dogs get too close to the boundary, it will receive a warning sound or a static correction through its invisible fence collar.
An invisible underground fence has an underground system around a set area, like a yard. A transmitter that is connected to the sends out a radio signal that goes through the underground wire.
The receiver collar that your pet wears is also important. An antenna on the receiver picks up the radio waves that travel through the buried wire.

The most common type is the buried wire fence. This type of fence requires that you bury a wire around the perimeter of your yard. The transmitter emits a radio signal that is received by the wire. When the pet gets close to the boundary, it will receive a correction shock. 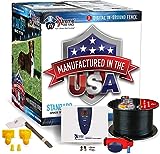 The wireless system is the second type of invisible fence. The basic idea of this type of fence system uses a transmitter that emits a radio signal. The signal is received by a collar worn by your pet. When the pet gets close to the boundary, it will receive a correction shock.

Burying the wire beneath the soil is relatively easy. Using a flat-edged shovel, puncture the ground and wiggle the shovel back and forth a bit to create a very narrow trench. Continue this, shovel width by shovel width, until you mark out the entire perimeter of the fence.

An alternative method would be to purchase or rent a trench digger, but because the trench needed is so narrow a trench digger may be more trouble–financially and otherwise–than it’s worth. Once you’ve got the perimeter marked you can tuck the wire in and tamp down the soil to seal the wire in place. The deeper you place the wire the less likely it is that the wire will be displaced or damaged by landscaping work.

Putting the wire in the ground is easier than crossing a road or sidewalk. There are circular saws that can be used for this. You need to cut along the pavement where you want to lay the wire.

Cut along the concrete joint where you want to put the wire. If not, cut as you need to. To cut wire, make sure you use a saw blade wide enough for you to put the wire in when you’re done cutting.

Remember to make sure that you put in wire on both sides of the concrete. This way, when you use edgers in the future, they won’t cut the wire. After the wire is in, you’ll need to fill in the hole with self-leveling mortar to make sure it doesn’t leak.

The Advantages of Having Invisible Fence?

An invisible fence is easy to install. You can do it yourself or hire someone to do it for you. The cost of the materials is not very expensive, and you don’t have to pay for a professional installation.

The most important thing is that you need to be careful when installing the fence. If you’re not careful, you may damage the underground wire, which can be expensive to repair.

Apart from that an invisible fence is portable. You can take it with you when you move to a new house or apartment.

Plus, it is easy to maintain. You don’t have to paint it or repair it if it’s damaged. All you need to do is replace the batteries in the transmitter and receiver. 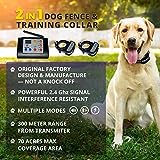 If you live in a certain neighborhood, you may not be able to put up certain types of fencing. Those who live in areas where they can’t own land can set height, material, or design rules for the fences that are supposed to be put up there.

Avoid The Pain Of Having To Follow Fence Restrictions.

The nature of an invisible dog fence lets you avoid walking on eggshells around community rules. There is a part of the fence that is underground, so your neighbors won’t be able to see it.

In this case, a physical fence won’t be the best way to keep your dog from getting out. Dogs can also easily dig under a normal fence, get out of your yard, and go on dangerous walks in the middle of a busy street.

Dogs Will Stay Safely Inside Your Backyard.

With an invisible fence, your dog won’t go any further because of the deterrent stimulus it gets when your dog approaches the safe zone. you can be assured that your dog can run free at a certain distance.

A lot of invisible fences have a battery backup. This safety feature will give you peace of mind if you ever forget to check the battery life of the receiver, so you don’t have to worry. 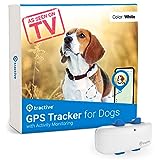 It Is Affordable And Lasts A Long Time

The average lifespan of an invisible fence is around 15 years. This is a significant investment, but it’s worth it because you don’t have to replace the system very often.

It also doesn’t take up much space in your yard since most of the equipment is underground. You’ll be able to save money on landscaping because you won’t need to worry about planting trees or shrubs to camouflage the fence.

An invisible fence is an affordable way to keep your pets safe. It’s also a long-term investment that will save you money in the long run.

Safer Option For Your Dog

The biggest advantage of an invisible fence system is that it’s a much safer option for your dog. With other fences, there are many ways for your dog to get out.

They can jump over a physical fence, dig under it, or even chew through the fence material. If your dog gets out, it could be in danger of being hit by a car or getting into a fight with wild animals.

An invisible fence is the best way to keep most dogs safe and sound in your backyard.

These invisible fences don’t hurt your dog in any way, but the “shocks” these fences give are just enough for mild correction like and keep them from going into places that aren’t supposed to be there. If your dog is bigger or more stubborn, you can choose a static correction that is just right for it.

The Disadvantages of Having An Invisible Fence

It May Not Work for All Dogs

Generally speaking, invisible fences may not work for all dogs. If your dog is very small, the correction shock could be too strong for it.

Apart from that, dogs that are very old or very young may not be able to learn the boundary training process as quickly as other dogs. It’s important to start a training program for your dog early so they can get used to the system.

Some Dogs Don’t Mind The Shock.

If the dog sees that the reward is greater, even if the shock collar is set to the highest level, it won’t always keep dogs who are very excited from running over the boundary. It’s worth it for your dog to chase rodents or play with other animals who walk by your yard.

The System May Malfunction

Even if you keep a close eye on the workings of your system, some dogs can figure out how to get around it, even if you’re very careful. When their collar’s batteries ran out, they would stay inside the beep zone until she was out of battery. Then she would calmly walk out of the boundary flags.

Apart from that, electric fences may not work in all areas. If you live in an area with a lot of trees or hills, the signal from the transmitter could be interrupted.

This would cause the fence to not work properly and could put your dog in danger. You’ll need to make sure that the invisible fence you’re considering will work in your area before you buy it.

Invisible fences require regular maintenance. You’ll need to check the batteries in the transmitter and receiver, and you’ll need to make sure that the signal is working properly.

You should also have a backup plan in place in case the fence doesn’t work for some reason. While invisible fences are a great way to keep your dog safe, they’re not perfect. There are some things you’ll need to consider before you buy one.

Make sure that it will work for your dog and in your area, and be prepared to do some regular maintenance. But if you’re willing to do that, an invisible fence is a great way to keep your pet safe.

One of the main complaints about invisible fences is that the correction strength is inconsistent. This means that your dog may get a strong shock one time and a weak shock the next.

The prongs On The Collar Could Hurt The Dog’s Skin.

If the prongs on the collar that your dog wears are not placed properly, they could rub against your pet’s skin and irritate it.

You’ll need to check the collar regularly to make sure that it’s not causing any discomfort for your pet.

Some animal behaviorists mention that this can cause fear, anxiety, and anger in your pet. If you’re concerned about your dogs, this is something you’ll need to consider before buying an invisible fence.

Dogs may become aggressive or start urinating inside the house out of fear. This is something you’ll need to consider before buying an invisible fence.

Do Not Stop Outsiders From Coming Into The House.

If you’re looking for a way to keep strangers or other dogs out of your yard, invisible fence systems are not the answer. This type of dog fence will only keep your dog from leaving the yard, not from anyone coming into it.

For dog owners, an invisible dog fence is a great way to protect dogs from being hit or getting bitten by other dogs. However, there are things you should consider before you buy one. Make sure that it will work for your dogs and in your area, and be prepared to do some regular maintenance. But if you’re willing to do that, an invisible fence is a great way to keep your many pets safe.